“Recycling ghosts” was conceived as a participatory project meant to question the visual and symbolic reality of some architectural elements, signs and objects, insofar as the local socio-cultural context has the function of reflecting the collective perception.

The term “ghost”, borrowed from the terminology of the neoliberal socio-economy, aimed to associate the exhibition project with the reflection of the temporary existence of entities and identities created within the context of large corporations’ mass productions.

The installation in the gallery displayed a scale model that followed a route marked like a medieval treasure hunt map, a result of the miniaturization of temporary pseudo-monuments arranged in the local public space, as well as a series of objects whose symbolism is often ignored or diminished, being incorporated into a hybrid structure meant to suggest the de-hierarchy of the exhibition space.

During the presentation of the exhibition, a series of pseudo-monumental artistic interventions could be viewed, successively, for six days, inserted in the public space, on the following route: the Statue of Independence park, the pedestrian street at the University of Medicine, the Vasile Alecsandri National Theater park, the cube on Ștefan cel Mare street, the square in front of the Junimea bookstore and the courtyard of the Faculty of Arts. Every day, in every public place where the works were installed, thematic debates were organized that publicly questioned the knowledge, visions and decisions related to questioning and managing the dilemmas of recycling the eco-attitudes of artists and passers-by.

The pseudo-monuments had the role of visually reinterpreting the possibility of applying certain solutions that aim at the applicability of theories about the depletion of the Earth’s natural resources, as perceived in the local public space. They were also meant to illustrate an ironic reproduction of these “solutions” extracted through a questionnaire, by distorting the meaning of a collective vision or a common consciousness regarding the probability of preventing the natural environment’s degradation. 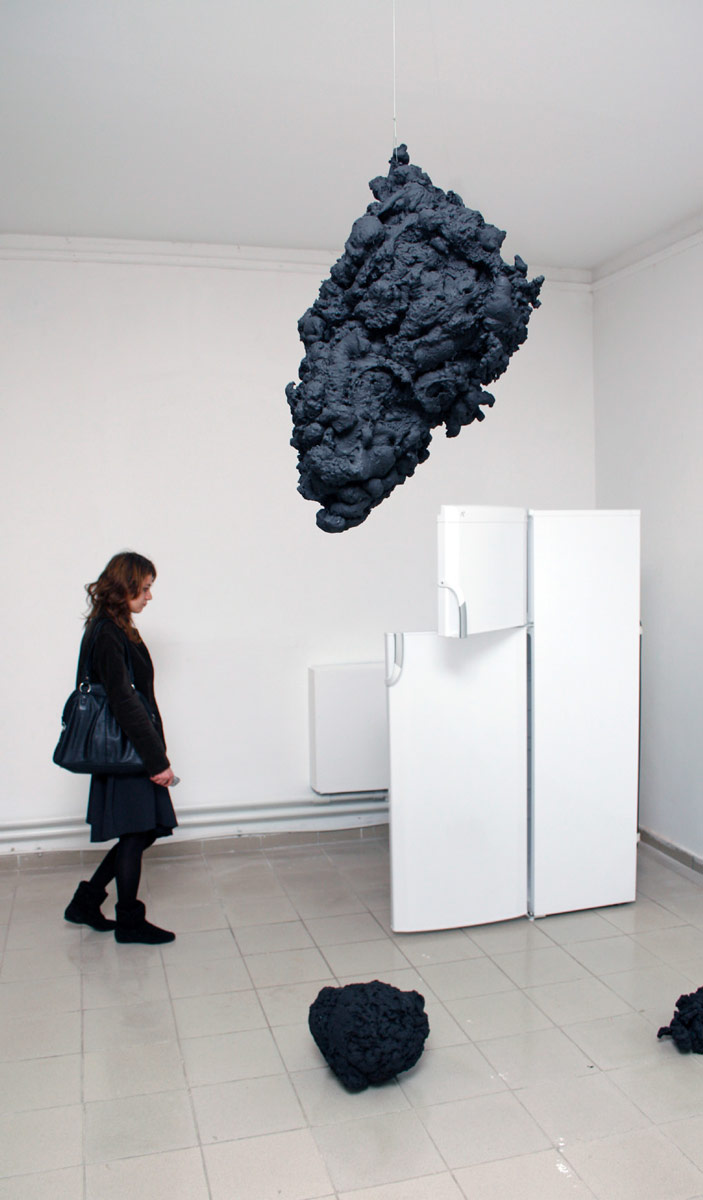 SATELLITE (Social Artistic Tendency group) is a collaborative group of artists (art students at that time) founded by Delia Bulgaru, Andrei Timofte, Anca Ștefănică, Alex Tărnăuceanu, Cristina Totolici and Clara Casian in February 2010. The name of the group was given by the idea that the artistic practice developed by the members would have a social applicability and would aim at a series of studies that would also use certain sociological and administrative tools. The term “satellite” was a metaphor for the geographical distance of the artists, who nevertheless shared a common vision on the various aspects of the impact of culture and art on the social environment.